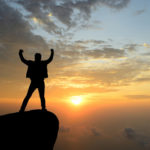 “Let me assert my firm belief that the only thing we have to fear is fear itself—nameless, unreasoning, unjustified terror…”
— Franklin D. Roosevelt, First Inaugural Address, March 4, 1933

The purpose of this affirmation is to create a mood and mindset free of fear. Fear is the most common negative emotion. It constricts the mind and body, and eliminates creativity and productivity. The emotion fear releases harmful hormones that result in chronic stress, depression, low self-esteem and underperformance. I grew up poor and insecure in a farming village in India. My parents lived with perennial debt; constantly worrying on how they would find their next meal. They could not afford to support me financially as I worked towards my undergraduate or medical degrees. It was up to me to secure my own funding. As a result, I lived in a constant state of fear on how to find money to pay tuition and board. What little help I found dried up quickly—yet there were few ways or opportunities to make money as a student in India during the 1970’s. Yet over the years, my fears hardened and transformed into an unassailable belief that help will always arrive somehow, from somewhere. Conquering fear was the most exhilarating and liberating emotional experience I have ever had. And so the state of “feeling free and fearless” took root on my list of affirmations.

Fear of the unknown is a universal human emotion; but one that is worth discarding. The “fight or flight response” was sewn into the process of human evolution to give us a survival advantage. But in the modern world, we no longer require such a reaction to everyday occurrences. The reaction has become a hindrance to human energy, creativity, performance and joy. You must become accustomed to questioning your fears and where they come from—and then tear them down. Ask why, how, and what you fear—challenge them. Ask what if questions, play out the good, the bad, and worst scenarios, but do not be conquered by the weight of the unknown. Lay out your escape routes. The fear of the unknown, when exposed to your rational questions may crumble. I urge you to get rid of all sorts of fears. Live free and fearless. Exercise courage, conviction and conscience. And above all, to yourself be true.

Build an enterprise of your own to boost your courage and confidence, and look to the past for those who have gone before you. Read biographies of inspiring historic icons, legends, revolutionaries, reformers, apostles, philosophers, explorers and adventurers who lived free and fearless. From the inception of our country they have conquered fear and staked their lives to their personal beliefs; as evidenced by George Washington; Patrick Henry and the words of the Declaration of Independence. George Washington, the father of the Revolution, waged a struggle against England to attain sovereignty and freedom for his infant country. Listen to a performance of Patrick Henry’s “Give me Liberty, or Give me Death!” speech he made to the Virginia convention to convince the delegates to send their states troops to war. By living free and fearlessly—by putting his convictions over fear of English retribution—he inspired courage and patriotism among his peers. Look to the Declaration, and its first guarantee—that it “Holds these truths to be self-evidence, that all men are created equal, that they are endowed by their creator with certain unalienable Rights, that among these are Life, Liberty, and the Pursuit of Happiness.” From its inception, the American democracy has recognized that a freedom of fear—the ability to pursue happiness—is not merely an opportunity but a right, guaranteed to all. Americans are a fiercely independent people; and this original declaration of their freedom glows in their hearts and spirits eternally.

Yet our original union was not perfect, and it required leaders of marginalized groups like Martin Luther King Jr., Susan B. Anthony and Jane Addams to achieve the declaration that all men and women are truly created equal. These three lived their lives without fear and with conviction. MLK’s movement against racial discrimination and segregation in the years of Jim Crow and lynchings inspired millions of Americans to live a little more free of fear. He galvanized not only blacks but thousands of fair minded whites to march shoulder to shoulder with Black Americans in Montgomery, Alabama. He and his followers became beacons of hope for the freedom struggles and civil rights movements to the rest of the world, because they lived an authentic and fearless life. Likewise, female leaders like Susan B. Anthony and Jane Addams demanded equal labor and civil rights for women. They mobilized men and women to march and protest the injustice. They lobbied congress and the President to amend the constitution to guarantee voting rights for all. These women instilled in others the courage and confidence to rise against inequality, discrimination and unfair practices in the country. Across the country and the world, men and women follow the practices of these three examples, discarding their fear to live freely and advocate for the freedom of others.

Western history is covered with the struggle of the oppressed to exercise their freedom over oppression. The industrial revolution awakened the masses; they demanded better wages, improved working conditions, shorter working hours and overall fairness. It laid the foundations for the new titanic struggle of capitalists versus workers. The ensuing struggle between these classes marked human history for two hundred years; as nations and companies accumulated profits and capital in Western Europe and then America at the cost of their workers. America became the center of world capital. Yet seeing the plight and aspirations of the working class, German political philosopher Karl Marx authored the Communist Manifesto, asserting the right of workers to usurp political power. He was not authorized to declare this, yet he did—and so workers demanded freedom, fairness and equality, a demand that spread like wildfire across Europe, Asia, and the Americas. Working class movements emboldened peasants; students and intellectuals to orchestrate the October Revolution; the Chinese agrarian Revolution and Vietnam War. It was an era when the oppressed and lower class demanded and fought for national independence and the realization of their rights. The two ideologies of Western capitalism/imperialism and Soviet socialist fervor clashed time and time again in the Cold War. The peoples of Eastern Europe waged a fierce struggle for economic and political freedom against the oppression, deprivation and tyranny of governments of all types. They tore down the Berlin Wall; crumbled the Soviet Empire, and managed to avoid total nuclear annihilation. Today, as a result of the struggle of those who lived free and fearlessly, the Western and Soviet blocks live in a state of more or less peaceful coexistence.

Across the globe, the motto of the 20th century has been to live free and fearlessly. This maxim spoke to and inspired equal rights for women, workers, and the economic and civil demands of all types of oppressed groups. Higher wages; better working conditions; shorter hours of work and cries for peace are all simply aspects of the calls for freedom from fear. Calls for freedom crumbled imperialism; crushed the block of Soviet nations; tore down the Berlin wall and guaranteed national and personal independence for hundreds of countries and billions of citizens around the world. Today, that call for freedom has spread south and east of the Soviet Bloc, as the Arab Spring bloomed in the Middle East, with calls for freedom of press; speech, and liberalization. Facing no nation of their own after the genocide of the Holocaust, Zionists returned to the land of their holy book, establishing the nation of Israel. But they established their state in the land of Palestine, ironically displacing the Palestinians, who are now reduced to stateless refugees living on neighboring lands under the yoke of the nation of Israel. Both countries are fighting to form a country of their own to practice their faith; to prosper and live in peace—yet driven by fear, we see the destruction that results.

The desire for personal peace, security, and the health of body and soul is universal. Thousands of Central American refugees flee across borders for better opportunities in the USA. African refugees pile on rickety boats to cross the Mediterranean for a chance at a better life in Europe. Chinese and Indian students try to find a way to the western world, where their economic freedoms are expanded. We should look to these people, and the struggles they must endure, as a perspective on our own struggles.

Affirming the mantra of “feeling free and fearless” daily empowers positive thinking, courage and self-confidence. It unleashes the conscientious self, unhindered by the daily concerns of the outside world. Someone freed of fear acts on their own wishes. They can cherish their freedom to say “yes” or “no,” as they desire, knowing that it is their decision alone. They have obtained the freedom to disagree; argue; stand their ground or compromise. All freedoms—be they political, economic, social, civil or religious—go hand in hand. They are timeless. It is a basic human right, and it is here to stay. And the joy of life is possible only when a person enjoys total emotional, psychological and political freedom. It is a full appreciation of these rights and the struggle required to obtain them that allows us to discard our fears and live life authentically.